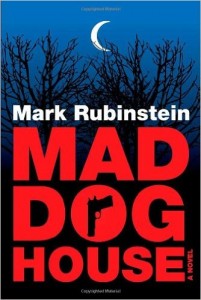 Roddy Dolan, a successful suburban surgeon, long ago left behind his past—one that nearly landed him in jail at 17. When he’s approached by an old friend about becoming a silent partner in a Manhattan steakhouse, he’s understandably wary. So he consults with his lifelong blood brother, Danny Burns. Danny’s convinced this “vanity project” is the perfect trophy to illustrate how far they’ve travelled. Certain he’s buried his checkered past, Roddy joins in this venture with serious reservations. Danny is quickly sucked into the high-energy glitz of the restaurant, but Roddy is suspicious. Amidst the glitter of New York’s nightlife, amongst Mafia honchos and Russian thugs, events spin out of control and the lives Roddy and Danny knew are over. Hidden shady dealings drag them and their families into life-threatening terrain. Struggling with a monster he thought he’d buried, Roddy must make momentous choices, and none are good. But he has a daring plan . . .

“I stayed up all night to read Mad Dog House. I didn’t plan on it, but when I got into it, I couldn’t put it down. It was fantastic, riveting, suspenseful, twisting, loving, horrific — and I’ll never go into the restaurant business, ever. I just kept reading faster and faster to find out the ending.”
—Martin West, film and television actor and filmmaker

“If you’re looking for a ‘can’t put down,’ fast-paced, superbly written thriller, then Mad Dog House is a must-read for you! The story hooks you from the get-go, with characters expertly drawn and placed in an evolving situation that takes them (along with you) from what seems to be an excellent business opportunity to a horrific reality, which reignites long-buried personal demons. You’ll still be reeling long after reading the knockout ending to this awesome thriller.”
—Linda C. Sutter, former Director of Talent, CBS Sports, CBS Television Network

“The characters in Mad Dog House are compellingly real. It was a great read!”
—Ann Chernow, artist and writer

“In Mark Rubinstein’s Mad Dog House, the characters — all well-developed and dripping with authenticity — propel the novel along with style and edge-of-your-seat excitement. Word of caution: be prepared for an all-night, page-turning read where you will emerge exhilarated and begging for more.

“Rubinstein, a master at his game, introduces us to a world of glitz, glam, sex, and intrigue. Slip into a chilled martini and settle in for a literary ride you won’t soon forget.”
—Judith Marks-White, author of Seducing Harry and Bachelor Degree, and columnist, “The Light Touch,” Westport (CT) News

“A gripping, harrowing, and provocative psychological thriller, featuring a plot packed with action and intrigue, staggering and brutal twists, and deeply disturbing possibilities . . . the author . . . has a gift for delivering gut-punching surprises while raising unsettling questions about the basic nature of human nature and the inescapable hold of the past. The ending is a real shocker!”
—Mysia Hiaght, www.pressreleasepundit.com